A Playwright’s Glimmers of a Fugitive Childhood 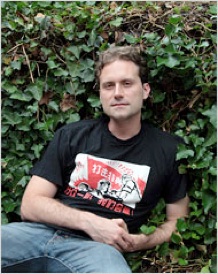 When Zayd Dohrn began writing “Sick,” a play about a Manhattan family going to extremes to shield themselves from pollution, he tapped into anxieties around him: he was living in Beijing at the time, during the height of the SARS epidemic, and he had moved there from New York, where environmental fallout from the Sept. 11 attacks was widely feared.

But Mr. Dohrn, now 32, had even more personal experience to draw on. Until he was almost 4 years old his parents, the former Weather Underground leaders Bill Ayers and Bernardine Dohrn, were living with him in hiding in Morningside Heights, and using assumed names — even for Zayd, who was known simply as Z.

Only a handful of memories remain with Mr. Dohrn from that young age, and yet those years on the run from the police — followed by his mother’s brief time in jail after she and Mr. Ayers turned themselves in — have fueled an abiding fascination with living under extreme conditions and pressures.

His work is drawing attention from a growing number of theaters across the country, with “Sick” running at the Berkshire Theater Festival through Sunday. Another play, “Reborning,” involving a woman trying to recreate and rewrite her past, was produced for the Summer Play Festival at the Public Theater in July.

“A lot of what I think and write about deals with constraints and looking for a way out, especially in family situations, when the struggle to live free of constraints can take an emotional toll,” Mr. Dohrn said recently over coffee near Columbia University, a few blocks from the 123rd Street apartment where he and his parents lived in hiding.

“It may sound strange, but I didn’t feel especially smothered by my family’s constraints, even though I was aware of them,” he continued. “They were simply something I was aware of. The worst year for me was when my mother went to jail. It was so sad and scary. I remember visiting her and sneaking in ‘Winnie-the-Pooh’ and ‘Charlotte’s Web’ through the metal detectors so that she could read to me.”

An earlier play of Mr. Dohrn’s, “Haymarket,” is his most overtly political and historical work, about a real-life 19th-century gathering of radical demonstrators in Haymarket Square in Chicago. A bomb goes off during their rally, and some of the radicals go into hiding afterward. The incident evokes an experience of Mr. Dohrn’s parents, who fled a Greenwich Village apartment in 1970 after the accidental explosion of a bomb killed three fellow members of the Weather Underground, an organization that conducted a campaign of bombing public buildings in the 1960s and ’70s as a form of protest.

Mr. Dohrn does not include any explicit echoes of his parents in “Haymarket,” though, and he said that in general he tried to avoid heavily reflecting his own life — or theirs — in his work so far. “For me it’s not very interesting to write about myself or my parents,” he said. “That doesn’t create any special friction for me.”

Still, Mr. Dohrn said he could imagine writing a play someday about the experience of his father during the 2008 presidential election.

Mr. Ayers, now an education professor at the University of Illinois at Chicago, became a lightning rod for opponents of the candidate Barack Obama because the two men were acquaintances and neighbors in Chicago. Leading Republicans attacked Mr. Obama for having ties with, in Mr. Dohrn’s words, “this extreme caricature of my father as a so-called unrepentant terrorist.” (Mr. Dohrn’s mother is an associate professor of law at Northwestern University.)

“It was a very weird experience, sitting down with my dad and watching CNN and Fox News and ‘The Daily Show’ describing him as this wild symbol of extremism rather than as a human being,” Mr. Dohrn said. “While it wasn’t particularly painful — my dad and I would laugh about some of the coverage — it was surreal and at times quite ominous. I could certainly see creating a play out of the experience.”

“Sick,” meanwhile, was inspired foremost by Mr. Dohrn’s observations of residents of Beijing wearing surgical masks, closing their shops and staying indoors during the SARS crisis. (This year’s swine flu epidemic gives the 2003 outbreak of SARS, also a respiratory illness, a particular relevance.)

Mr. Dohrn was living in Beijing with his wife, Rachel DeWoskin, a writer and actress, who had a starring role in a television soap opera, “Foreign Babes in Beijing.” In the play the mother in the family — played by Lisa Emery in the Berkshire production — first enters the stage wearing a surgical mask, and uses air filters, oxygen tanks and other means to purify the air for her two teenage children.

“Sick” has also been produced by theaters in Dallas, New Orleans and New Jersey, and Mr. Dohrn said he was hopeful that the play would have a run in New York City at some point. Theater critics have been mostly positive and encouraging about the work. A critic for The Boston Globe, reviewing the Berkshire production last week, described “Sick” as a “witty, original dramedy” with “a brilliant if flawed script” marred by an anti-climactic second act.

The director of the Berkshire production, David Auburn, is himself the Pulitzer Prize-winning playwright of “Proof,” which also explored the bonds and tensions of a close-knit troubled family. (“Proof” ran for more than two years on Broadway, winning the 2001 Tony Award for best play, and was later made into a film.) Mr. Auburn said he was recruited to direct “Sick” by one of its Berkshire cast members, Greg Keller, who put him in touch with Mr. Dohrn.

Mr. Auburn said that while he recognized themes in “Sick” that might reflect Mr. Dohrn’s experiences with his own parents, he added that he never spoke at length with Mr. Dohrn about living underground as a child.

“It’s not something we ever really went into, in part because I tried to keep my focus on the text,” Mr. Auburn said. “I’m always interested in what the playwright intends, what they are trying to express, and usually that comes down to figuring out each moment with the actors in a given scene. But I didn’t see a need to dwell on Zayd’s past.”

Mr. Dohrn added that as much as his plays may have echoes from his own past, “Sick” also reflected his own experiences as a new father himself.

“My wife and I had also just had a baby when I was working on ‘Sick,’ and I was thinking a lot about how to raise this fragile newborn,” he said. “Relatively normal, sane people can really go kind of crazy when it comes to protecting their children.”