Review: ‘I’m Not the Stranger You Think I Am,’ Where Theater Meets Confessional 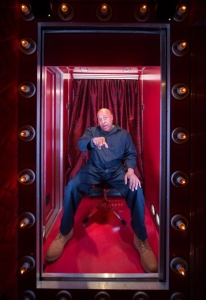 There’s no hiding in the dark this time, and none of the usual safety in numbers. It’s just you and her — or him — eyeball to eyeball, in a closed, red space the size of a confessional. If you blush or yawn or wipe tears from your eyes, she sees it; that means, of course, that she feels it, too.

The responsibilities of being an audience rarely weigh as heavily as they do in “I’m Not the Stranger You Think I Am,” the series of short (roughly five-minute) plays that opened this week at Brookfield Place in Lower Manhattan. The self-contained, tiny (4 feet by 8 feet), mobile structure in which these solo dramas take place resembles a confessional in more ways than one.

As this mini-theater has been created, by the inspired designer Christine Jones and the architectural firm Lot-ek, you find yourself in immediate proximity to someone who has every intention of confiding in you. He or she materializes when a screen slides away, revealing a person seated, as you are, and as close as the image in your bathroom mirror.

There may be a few seconds of silence, but then this person starts talking with the urgency of someone who really, really needs you to understand. Under the circumstances, you have no choice but to try to honor the request.

Such, in essence, is the contract that’s forged between performers and audiences whenever the lights go down in a theater. But with Ms. Jones’s Theater for One, which is presented by Arts Brookfield and True Love Productions, that contract is reduced to its most basic equation.

You don’t have to pay a cent to see one of the plays that make up “I’m Not the Stranger You Think I Am,” but you do have to invest your unconditional attention. (The production — which seats people on a first-come-first-served basis — remains at Brookfield Place through Sunday; it will be at Zuccotti Park from May 27 to 31, and at Grace Building Plaza June 2 to 6. Earlier editions, with other plays, ran in 2010 and 2011.)

You should know that are you not required to say anything yourself, though several of the six plays I saw began with the performers asking me questions: “Are you lost?” and “This is kind of embarrassing, right?” A nod or a half-smile, or even a blank expression, will do as a response. These people are required to keep talking.

But it’s hard to avoid the feeling that you’re contributing to a dialogue, even if you don’t say a word. Me, I said exactly one word: my first name, when a particularly insistent jerk, played by Andrew Garman, kept asking what it was. This was in a play by Thomas Bradshaw (“Job,” “Burning”), a writer who specializes in jerks and in making audiences uncomfortable.

The man embodied by Mr. Garman always seemed to be looking for me to agree with the annoying suppositions he was making about class and sex. The woman (Marisol Miranda) in José Rivera’s play “Lizzy” also appeared to seek validation for her feelings, in this case regarding the death of her mother. The wistful young thing played by Carmen Zilles in Emily Schwend’s “The Way Back” seemed convinced that I had broken her heart.

Other plays I saw were written by Lynn Nottage (“#Five,” performed by Keith Randolph Smith) and Zayd Dohrn (“Love Song,” featuring music by its performer, Kevin Mambo). They were less directly confrontational, though they throbbed with the faint current of embarrassment that always accompanies deep intimacies from people you’ve just met.

I was reminded that theater is nearly always about creating an intense intimacy, or the illusion of it, of people revealing themselves to us in the hopes that we’ll understand them. What Theater for One does is makes us acutely aware of this process, to put our relationship with those on stage under a magnifying lens of self-consciousness.

Not incidentally, a master of self-conscious theater is represented. That’s Will Eno (“Thom Pain (based on nothing).” “The Realistic Joneses”), whose offering here is titled “Late Days in the Era of Good Feelings.”

Its interpreter, Erin Gann, explained that he had been under the impression that this was a project called “Theater of One.” He had assumed there would be, yes, just one performer — him — but the usual sizable audience in, he hoped, a large and echoey room.

Discovering otherwise had required instant readjustments to the performance he had planned, he said, and he knew he was going to flop. Still, he asked, couldn’t I look like I had a good time when I left the mobile theater?

Though I’ve never had an actor say that to me before quite so baldly, I’ve felt that hopeful plea lurking beneath many a performance.

I’m Not the Stranger You Think I Am

“The Way Back” by Emily Schwend; directed by Christine Jones; performed by Carmen Zilles.

“Late Days in the Era of Good Feelings” by Will Eno; directed by Brian Mertes; performed by Erin Gann.