THE PROFANE is a New York Times Critics’ Pick 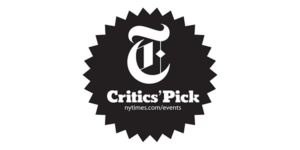 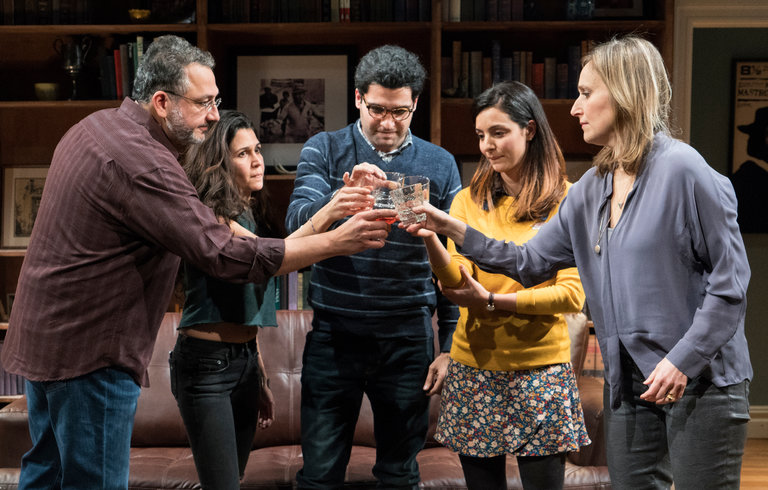 Oh, poor Sam. He’s traveled all this way at Thanksgiving to meet his girlfriend’s parents, and her father won’t even shake his hand. Good-looking, polite, pre-med, Sam seems eminently presentable — but not to this family. He gets zero points for being smitten with their daughter Emina.

“Of all the guys you could have picked?” her sister Aisa (Francis Benhamou) says in “The Profane,” Zayd Dohrn’s approachably eloquent, frequently comic new drama at Playwrights Horizons. “You know this is Pa’s worst nightmare.”

Raif (Ali Reza Farahnakian), their father, is a famous novelist who came to the United States as a student, leaving the Islam of his youth behind. Naja (the extraordinary Heather Raffo), their mother, was a dancer. Everything about this immigrant couple — their spacious Greenwich Village apartment, teeming tastefully with books and art; their accents, by now standard American — suggests comfortable assimilation into an elite stratum of secular society.

These are not people who hoped that a child of theirs would fall in love with a son of conservative Muslims, yet Emina (Tala Ashe) has. Away at college, she has started to remake herself accordingly: No alcohol, and she has sworn off sex with Sam (Babak Tafti), though they’d been sleeping together for a year. “It doesn’t work, you know, retroactively,” he teases her, respectfully opposed.

The young couple announces their engagement — she not fully grasping that he has lost his faith, he seemingly unconcerned by the allure piety has for her. Their optimism and devotion notwithstanding, what could the future possibly hold for such a union?

Directed with restraint by Kip Fagan and imbued with uncommon humanity by an impressive cast, “The Profane” is by turns warm and wary, combative and conciliatory. Religion is not truly its subject, interested though it is in what it means to be Muslim, or formerly Muslim, in the United States. And while all the characters are immigrants or children of immigrants, it is not principally concerned with the immigrant experience.

Rather, Mr. Dohrn is examining the cultural unease between the secular and the fundamentalist, and the difficulties in reconciling the two. Telling its story partly through a small spectrum of marital unions — including the affectionate one of Sam’s parents, Carmen (Lanna Joffrey) and Peter (Ramsey Faragallah), and the limping, though loving, partnership of Naja and Raif — “The Profane” is deeply invested in a question about the state of our own Union: Can we live together, and be good to one another, for the long haul?

“I’m so scared of what the world’s becoming, I can hardly write at all,” Raif confesses, and that fear feeds the play. As papa bear, he is part teddy, part grizzly, and when he looks at Sam he envisions Emina being borne back into an unenlightened past.

“I know these people, Emina,” he warns her, meaning Muslim fundamentalists.

“‘These people’?” she replies, outraged. “Our people?”

“They are not our people,” he says.

On the surface, “The Profane” might seem to resemble Danai Gurira’s “Familiar,” another tale of immigrant parents and young lovers, which was at Playwrights Horizons a year ago. But unlike “Familiar,” no one in “The Profane” is longing to return to the old country. Sam’s parents raised their children in Queens, and when the nest was empty they moved to the suburbs, where they have a pool out back.

In this house (the set is by Takeshi Kata), where Emina brings her parents to meet Peter and Carmen, the only visible book is the Quran, exhibited in a place of honor even after Sam whisks away any other overly Islamic touches. (Rolled up prayer rug? He puts it away before the guests arrive.)

Peter, a successful salesman with a big, buoyant personality, is a hospitable host, Carmen a more nervous one. There is awkwardness, but no rudeness, at the start: Carmen’s bowed head as she declines to shake Raif’s hand, then her uncomfortably averted gaze when she sees Naja greet Sam with a kiss on each cheek.

Carmen may be the most interesting character here, partly because Ms. Joffrey instantly rebuts, with assertiveness and humor, any possible presumption that this modest woman in a head scarf (the costumes are by Jessica Pabst) is her husband’s doormat. All sorts of preconceptions fall away once these very different people are in a room together, with the happiness of their children at stake.

It doesn’t take much, though, for suspicion to creep back in, accompanied by enmity and disrespect. When Naja notices something amiss, an emotionally charged secret her hosts have been hiding becomes the play’s big reveal — a tangled, wobbly moment that doesn’t land with anywhere near the force it needs.

The audience on Friday night was so susceptible to shock that there were gasps when one character was splashed with hot liquid and when another bumped into a piece of furniture in the dark. But there was no palpable reaction at the spilling of the secret, and its immediate aftermath seems forced. By contrast, the rest of the play feels organic even in its intellectual sparring.

“I am an elitist,” Raif says. “I think there’s a difference. Between liberal and conservative. Atheist and fundamentalist. Good and evil. And I’m not going to sit here and pretend I think all points of view are equal, because I don’t. That’s not balance. It’s stupidity.”

Yet “The Profane,” which won the 2016 Horton Foote Prize, doesn’t tip the scales. It simply does one of the things theater does best: It gets us in a room, breathing the same air, thinking about how to be human together.